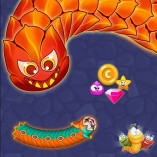 Worm Hunt: Snake Game IO Zone is a new snake multiplayer game where you create the largest worm. In this incredible worm battle royale, you can play in either a time-limited mode with a dwindling play area or an unlimited-time option in a massive gaming arena, and compete to see who can grow to be the biggest worm!

All the worms in this arena are starving, and it's time to see who comes out on top in this round of Battle Royale! Each one wants the biggest piece of food so that it can grow and take over the field. The game area will get smaller and smaller over time, though, so you won't have much time to grow into the biggest worm on the stage. When this happens, you'll see a five-second countdown, and the field that goes away will also light up red. So hurry away!

Use the mouse to move your worm and the space bar to speed it up. If you are in danger, go where it is safe and keep eating. Don't get too close to the edge, because the other predators and your surroundings are both dangerous. Collect power-ups to make your job easier, don't stop eating, and do everything you can to win. Dozens of enemies will try to stop you, but you can beat them all by getting stronger and better at what you do. Have fun!

When you aren't looking for food in the earth pit, you can use the main menu to improve your worm.
There is a skill tree where you can spend coins to buy different skills.
When you are in the red zone and have the beginner skill "Gluttony," you lose less weight.
When you have the "Radioman" ability, you can see more of the map.
Each worm here has a different skill tree that can be unlocked to give it different benefits.
You can also earn coins or gems by doing daily or weekly tasks or participating in themed events.